Struts
you are here: /
project build
Previous Next

Sweet, I can create new Chapters. Stay tuned for the unveiling of... the Detailing Corner. Seriously excited for this next chapter... 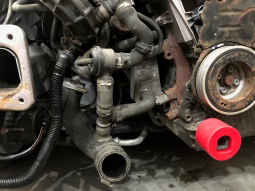 As part of the Dual Side Mount Intercooler mod, I decided to relocate my Diverter Valve(DV) for the following reasons:
-Easy access at the time
-Recirculate cooled air vs warm air
-Faster DV response
-Less turbo spool down on shifts and off throttle
-Easy access to the DV (apparently these need to be rebuilt every oil change... ?)
-and apparently its louder!! 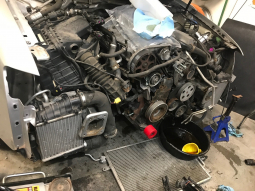 All B6 1.8t in North America only received one(driver) side mount intercooler. B6 1.9TDIs(Engine code BEX) across the pond got two side mounts. You can buy all that stuff, but its gets expensive in a hurry, or you can simply grab everything from a B7 2.0T. During one of our part outs, I corralled all the gear together to sell to someone for 100 bucks. But the only one interested wanted me to install it as well, and he wasnt to sure what the purpose for two intercoolers was. This 6spd came along and thought, this was the perfect free upgrade to do. 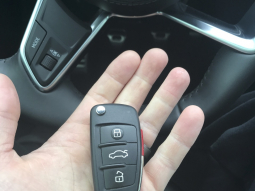 Going from the old style key fob to the new style B7 fob is a nice relatively cheap and easy upgrade.

There are two options to source a B7 FOB.
Used OEM B7 keys go for as low as 23 bucks on ebay. New Chinese knock offs go for 20 bucks on ebay. Some are 3 dollars, but thats only a case without a circuit board.
The ebay ones are cheeeeeaaaaaaappppp. The battery cover tabs break easily, the coating scratches easy and the button material feels even cheaper and wear quickly. Snag an OEM unit if you can.
Also some ebay units do not come with a panic button, which in someways looks cleaner.

Other than quality, the main difference is the ebay ones require reprogramming every time you disconnect the car battery or replace the fob batteries. OEM stay programmed forever(where you only need to hold the lock button and insert into ignition/ON and its re-programmed, the ebays ones its a longer process).

There are essentially two functions to the FOB. The first is to turn the car on. The second function is the lock/unlock/trunk/panic buttons. These two functions are completely independent from one another from a hardware and programming standpoint.

To get the proper lock/unlock/trunk/panic buttons to work, you need a key with an FCC ID : MYT 4073A
315mhz
8E0 837 220 L or R
All of this information is just behind where the blade rests, so no need to disassemble anything to locate.

To get the turning of the car on to function properly, you need a virgin IMMO ID48 chip, or steal your old B6 chip. Your old B6 chip is the ONLY thing that can be pillaged from the old remote. Well and the battery, but thats it. Not the blade or circuit board.
Virgin IMMO Chips can be had here:
http://www.keymam.com/
or on ebay. I've sourced from both with successful results. ID48 chip required

Both Ebay and OEM will need new blades to be cut. From the stories I've read online(I'm paraphrasing here), IF the dealership is willing to touch your blade, they send it off to a desert in Europe, apparently to a skilled basket weaver that lives in a house for fun, who then ships it to an unknown PO box in Belarus to be inspected by a troll, who rolls a deltoidal icositetrahedron, that determines if the fathers will grant permission of such witch craft to take place. If so, he'll wrap the forged metal in a black magic carpet back to Germany, which actually acts as a time machine to when the merger of the four companies originally took place in 1910 to form Audi. to then be cut by some young engineering student for 190 bucks, which is cheap given the process it goes through. But seriously, I dont think dealers cut blades.

Or you can goto your local lock smith, call first, and they can do it for 15-20 bucks.
You will also need the latest CCCM to get the B7 fob to work, covered in the sections below.

Project Build is about bringing together the community of car enthusiasts. Together we can build one central place to congregate and talk about cars. Project Build makes it easy for you to document procedures performed to your automobile, from changing your oil to swapping out your engine. Learn More...

Yeah thanks! I thought that was a nice touch as well.

Looks wayyyy better now. Interesting idea using the bosses like that to conceal the hardware behind the tabs on the frame. Ve...

I've only been able to idle the bike and blip the throttle since the shortening. Sounds similar, maybe a tad louder? I'm anxi...

how does it sound now?

Thanks spools! Ideally if I wanted to protect the aluminum from corroding I would anodize the parts. Aluminum has a natural o...

Nice work as always. Is there a way to apply a compound while on the lathe to preserve the finish from oxidizing? I like ...

I wouldnt trust those drawings, they dont have a stamp on them.

I'm surprised this required drilling, I would have thought they'd just mount the wing to the stock holes, seeing as it hugs t...

I've been wanting to use these features for too long! It's fun now that I FINALLY can. I'm loving the annotations too. Just g...